I have always been curious about the significance of a reduced cervical lordosis when it is written in radiology reports. After some research, I’ve discovered that it means pretty much nothing!

Perhaps a hyper-flexion injury or an excessively sustained neck flexion posture could contribute to increased laxity of the posterior cervical ligaments and the reduced cervical lordosis but evidence to support this hypothesis is still lacking.

Others have suggested that the reversal of cervical lordosis seen after neck trauma or an MVA, may be related to protective pain posture caused by muscle spasms. Once pain and muscle spasms reduce and the patient is able to maintain a more neutral neck posture while an x-ray is taken, the “abnormal” cervical curve becomes “normal” again.

Some clinicians have suggested that a reduced cervical lordosis is a negative prognostic factor for pain and recovery, but there is no evidence to support that hypothesis either.

I did a plain old Google search and found dozens of chiropractic articles and web sites stating that the loss of curve is one of the causes of neck pain and that it can be corrected after a series of cervical manipulations or costly spinal decompression machines (aka expensive traction).

Then I searched on PubMed and found only this 1993 literature review comparing cervical spine curvature in those with and without neck pain.

This review paper concluded that there was no evidence to support that reduced cervical lordosis is associated with pain or pathology and that there is a wide range of variability in the degree of cervical lorodsis among the asymptomatic population. 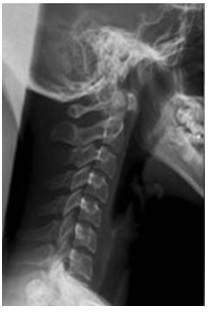 0
Diagnosing spondylolisthesis
Forward Bending is not so Evil after all!