Cushiony Shoes have Messed up Runners!

The modern running shoe was invented in the 1970’s to ‘improve’ the way evolution had worked for thousands and thousands of years.

For most of evolutionary history, human beings on earth were either barefoot or wore thin footwear with little cushioning relative to modern running shoes.

With only the best intentions, thick soled and heeled running shoes were made to reduce the impact caused by the foot colliding with the ground…it made perfect sense!

It is shown that barefoot endurance runners (i.e. in Africa) either land on the forefoot or land with a flat foot (but not on the heel!)

On the other hand, typical runners who wear shoes (i.e. in the Western world), impact the ground with their heel. Heel strike is made easy by the elevated and cushioned heels of the modern running shoe.

This amazing study clearly shows that even on hard surfaces, barefoot runners produce smaller collision forces than runners who strike with their heels even with thick-soled shoes.

Clinical Relevance: The current theory is that thick-heeled shoes are causing lower limb impact injuries in runners. Although counter-intuitive, wearing thin soled or flat shoes may protect the feet, knees and the hips from impact-related injuries.

If you have thick-heeled shoes, do not panic, just run with less focus on heel strike and more of forefoot strike! 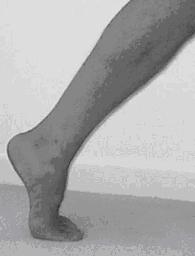