McKenzie theorized that centralization and the improvements in symptoms with repeated movements were potentially related to changes within the disc. Although the theory continues to be questioned, the prognostic value of the centralization phenomenon still stands.

Perhaps in non-degenerate discs, the nucleus pulposus migrates posteriorly during flexion and anteriorly during extension within the intervertebral disc. Most of the studies have been done on pig spines until a 2007 human study showed on MRI the validity of the above-mentioned clinical assumption.1

…oh if only life was that simple!

A 2009 paper showed that in those with mild to severe DDD, flexion did not result in posterior movement of the nucleus pulposus and, ironically, extension resulted in greater posterior bulging.2

Another 2012 study involved healthy subjects who received an MRI in sitting, standing and lying.3

They concluded that “…the apparent nucleus pulposus migration within intervertebral disc is actually deformation of the nucleus pulposus length which depends on posture and the magnitude of the load.” 3

In other words, there is no apparent nucleus pulposus migration within the intervertebral disc with different postures, it is simply an illusion.

A longitudinal study in 2008 on adult twins showed that genetics, occupational heavy lifting and smoking played a large factor in DDD but no identifiable factor explained the progression of posterior disc bulges.4 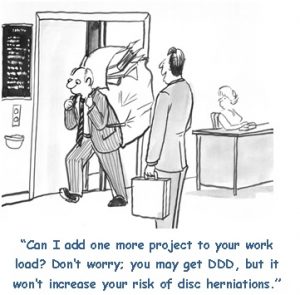 Two systematic reviews found that being overweight and smoking were both significant risk factors for the development of symptomatic lumbar disc herniations.5,6

And finally a 2018 study also concluded that “Neither age, BMI, nor gender had any statistical significant association with the risk of recurrent lumbar disc herniation. Smoking was associated with higher risk of reoperation…” 7

So what can we conclude?

We can safely say that disc bulges are present in a large percentage of the population and we don’t exactly know why some are symptomatic yet most are asymptomatic. We also know that the majority people symptomatically recover, yet their disc bulge on the MRI will remain unchanged.

Although I recognize the centralization phenomenon, I just cannot accept that 10 press-ups moves the nucleus pulposus back into the center. 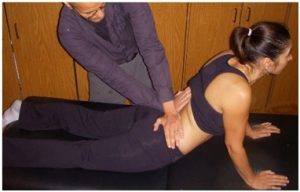 Certainly not when there is an extrusion or a sequestration, but I highly doubt extensions actually reverse even a prolapsed disc.

If however centralization occurs or symptomatic relief occurs with extension, flexion or a side glide, then certainly have the patient do the movements every 2 hours.

I hypothesize that when we empower patients to repeatedly move into directions that are pain-free or at least non-aggravating, the nervous system desensitizes.

When home programs are based on directional preference, the likelihood of improvement increases as it reduces the threat-value of movements.

In my humble opinion, for most patients, reducing fear is the highest predictor of success and not the movement of the nucleus pulposus!