How often does one need to exercise in order to reduce the risk of death from cardio-vascular disease?

This study looked at the association between the amount and intensity of exercise and cardiovascular mortality in over 50 000 men and women who were free from known cardiovascular disease at the beginning of the study.

Basic Summary: After 16 years of follow-up, 11% of the men and 9% of the women had died from ischaemic heart disease or stroke.

After some complicated statistical analysis, they concluded that, “…a single weekly bout of exercise of high intensity reduced the risk of cardiovascular death, both in men and women compared with those who reported no activity.”

The shocking conclusion was that exercising more than once/week provided no additional benefit with respect to risk of mortality.

Clinical Relevance: This study contradicts that we need at least 20 minutes of intensive exercising for at least 3X/week to protect against premature cardiovascular mortality.

Personal Comment: Ideally, we all should do something that increases our heart rate on a daily basis. However if some people simply can not do this, due to time, lack of motivation or pain, then even one-day a week is FAR SUPERIOR to no exercise at all. Share this study with your patients! 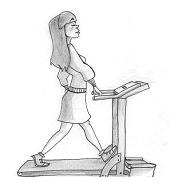