I am about to reveal to you in my humble opinion an almost revolutionary study, helping to take medicine and radiology in the right direction. Normally MDs and patients get the x-ray report and with great horror realize they have moderate DDD at L4-5, osteophytes, facet degeneration, etc. etc.

Normally MDs and patients get an MRI report and with great horror they discover the existence of disc bulges at L3-4 and L5-S1, stenosis, thecal sac compression, etc. etc.

The fact is that by far the majority of anatomical changes written in lumbar radiology reports are frankly irrelevant and do nothing but contribute further to patients? fear avoidance beliefs.

During a 3-year period, some radiologists decided to add a statement at the end of their lumbar MRI reports stating normal rates of specific “pathological” findings. Basically by revealing to family MDs and patients the rates of specific findings in asymptomatic individuals, it was assumed that both MDs and patients may become more re-assured and hence interpret the MRI findings with greater understating.

You may not believe this, but after analysis they discovered that the patients in the “re-assuring” statement group were significantly less likely to be prescribed narcotics for their back pain than patients who received the usual MRI reports (P=.01).

Also fewer of the patients in the “re-assuring” statement group were referred for repeated imaging and fewer were referred to PT for their back pain than patients who received the usual MRI reports (but not statistically significant).

However, the rates of steroid injections and surgeries were similar between the two groups.

Conclusion: This 2012 study published in the journal Radiology concludes that patients are less likely to receive narcotics prescriptions from their MDs when normal epidemiologic information is included in their lumbar spine MRI reports.

Personal Comment: In a tactful way I nearly always tell my patients, “studies show that 70% of all people with no back pain have disc bulges at one or more levels on their MRIs” …some feel a weight is lifted off their shoulders!

Then I give them “The Pain Truth” book to read. 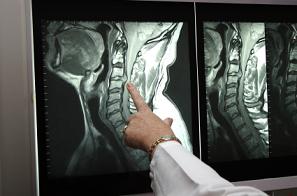