After discussing several systematic reviews in this Report I would like to end with my favourite one published in the British Medical Journal.

The aim of this systematic review was to determine whether parachutes were effective in preventing major trauma and death related to skydiving.

Conclusion: The effectiveness of parachutes has not been subjected to rigorous evaluation by using randomized controlled trials. Evidence-based practice does not support the use of parachutes for skydiving!

…despite the lack of evidence I support the use of parachutes, as no one has disproved parachutes so far!! 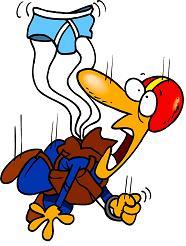