A person hurts their back, waits a couple of days and then decides to go to see their family doctor. They are most likely prescribed NSAIDs and then either referred to PT or told to wait a few weeks. After a few weeks if they are not better, they are sent for an x-ray and prescribed another course of NSAIDs. Even after 3 months they may be among the 93% of patients with LBP who are not referred to PT by their MD.

Although there is significant geographic variability, this retrospective study involving over 32,000 patients, showed that on average only 7% of patients were referred to PT for their acute LBP.

Q: Is it beneficial if the patient is referred to PT within the first 2 weeks of injury? Or should the MD wait a couple of months before referring?

A: Those who received early PT, were

Less likely to have advanced imaging

Less likely to have injections

Less likely to have surgery

Less likely to use narcotic medications

The patients who received PT focused on providing independent exercises and self-management programs had on average $1400 lower health care costs when compared to those whose PT involved passive modalities such as ice, heat or usltrasound. 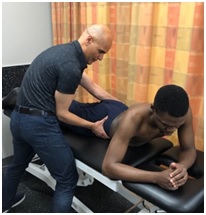 Based on this paper published in Spine, it appears that if referral to PT is to be made, delaying PT may increase risk for additional health care usage and costs.

0
PTs as Tough or Caring?
Relationship with Pain