Gorillas don't use pillows, why do we?

“Current thinking is to keep the spine straight by use of a pillow. Has anyone ever seen a gorilla shinning up a tree with a pillow?”

This paper written by a PT published in the British Medical Journal is one of the most fascinating articles I have ever read on sleeping postures and the development of neck and back pain.

The author is a British Physiotherapists who has studied primates in the wild, has commanded a platoon of African soldiers of various tribes and has organized several expeditions to study the sleeping postures of native people around the world.

All primates, including humans will at some point have musculoskeletal problems but the theory is that nature corrects them at nights. Based on anecdotal evidence he concludes that forest dwellers, natives, tribes people suffer fewer musculoskeletal problems than “civilized” people due to the fact that chimpanzees, gibbons and human beings without beds and pillows will all adopt similar natural sleeping postures. The second part of the theory is that the various naturally adopted sleeping postures on the floor with no pillows results in placing the spine and the limbs in positions that allow the body to naturally “heal” itself.

For our ancestors, sleeping on the side with the use of the arm as the pillow had the following advantages: 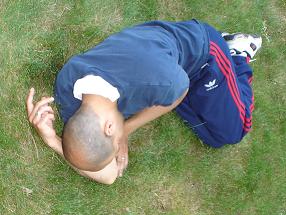 0
The Basic Slump Test Procedure: a criterion for Slump Mobilization Techniques
Thoracic Mobs or Manips…That is the question!