In 1895 Dr. Fritz de Quervain, a Swiss surgeon described a painful thumb condition that was later named after him. To identify it, we have been taught the Finkelstein’s test which is the passive self-inflicted flexion of the thumb by ulnar deviation while the thumb is gripped inside the palm.

However that turns out to be incorrect!!

Most clinicians and instruction manuals continue to erroneously describe what is in fact the Eichhoff’s test as the Finkelstein’s test. 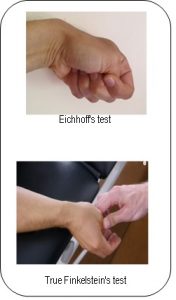 Dr. Harry Finkelstein, an American surgeon modified and improved the Eichhoff’s test in 1930. The true Finkelstein’s test is a passive flexion of the thumb into the palm by the examiner.

Clinical relevance: From now on use the true Finkelstein’s test as it is more comfortable for the patient and produces less false +ve results.

If Finkelstein’s is +ve on a new mother, tell them to avoid holding their baby by the armpits as it forced repeated extension of the thumb and wrist. Instead, hug the baby using the stronger brachioradialis and biceps.