This recent study demonstrated that teens (10-18y.o.) with adolescent idiopathic scoliosis (AIS)  who received taping with specific tensioning had better outcomes in pain and quality of life scores when compared to those who received placebo taping.

(To help you remember say “cave down”: Concave down, Convex up)

The placebo taping also included 2 strips of tape that were simply put on without any tensioning.

The tapes were applied once a week for 4 weeks.

All patients received home exercises consisting of strengthening the convex side and stretching of the concave side of the spine.

Perhaps in addition to a home exercise program, teens with AIS and spinal pain located specifically on their convex side could be temporarily taped. 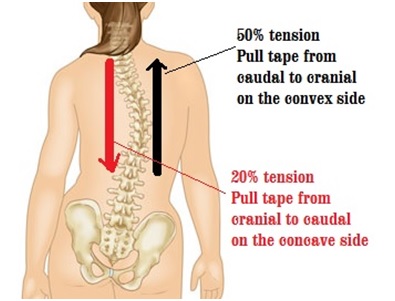