Clinical case studies have shown that those with phantom limb pain potentially benefit from motor imagery and viewing movements of the intact hand in a mirror. But why?

To help answer this, researchers studied the functional MRI of the brain in 14 upper extremity amputees, 7 with phantom limb pain and 7 without. They compared their mirrored, imagined and actual hand movements to 9 healthy subjects.

When subjects were asked to actively move their intact hand, the contra-lateral sensorimotor area was activated in all 3 groups …which is logical.

When the subjects were asked to do mirrored and imagined hand movements, unlike the other subjects the contra-lateral sensorimotor cortex of those with phantom limb pain was not activated.

This is fascinating stuff. I don’t see amputees in my practice, but I have a gut feeling that some of my patients have ‘phantom back pain’ and ‘phantom neck pain’. Meaning the pain is not from actual tissues (similar to phantom limb pain) but the pain is due to changes in their sensorimotor cortex …which makes PT focusing on specific back or neck anatomical structures useless.

…it makes as much sense as treating the empty space where the amputated leg once used to be, hoping that their phantom limb pain will get better…totally illogical! 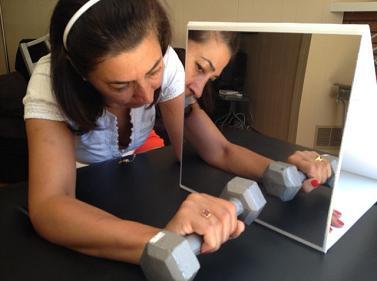 0
True Patient Case Scenario: A Must Read (But not for insurance companies!)
Mirror Therapy & Wrist Fracture