In the past 10 years, I have gone from using cervical manipulations infrequently to almost never. My personal bias, which is backed up by the evidence thus far, is that cervical non-thrust mobilizations are just as effective as manips.

There is no doubt that there are some patients who greatly benefit from cervical manips, but who are these patients? Can PTs identify them? This study set out to develop a clinical prediction rule (CPR) to answer exactly that question.

Consecutive patients with neck pain who attended an outpatient clinic were assessed and treated by a physical therapist and received 1-2 sessions of cervical manipulations over a one-week period.

Each patient received two supine cervical manips at the discretion of the PT between C3 – C7.

After one week, only those who reported feeling at least “quite a bit better” were considered as having a successful outcome.

1. Symptom duration less than 38 days
2. Positive expectation that manips will help
3. Right to left difference in cervical active ROM of 10� or greater
4. Pain with PA spring testing at C3-C6

If a patient had 3 of the 4 attributes the probability of having a successful outcome was 90%!

Future studies are needed to validate the results of this study. Having a comparison group receive only mobilizations would be of great benefit!

Personal Comment: Do you notice a trend? In both the prayer and manipulation study, patient expectation was a significant predictor of outcome …something to think about. 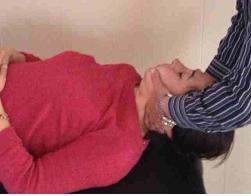 0
Strengthen the Gluts of Sedentary women with PFPS
Does Prayer Reduce Pain Perception for Atheists?