The relative weakness of the fifth finger test (RWFF) has been suggested to be a hallmark for thoracic outlet syndrome (TOS). The RWFF test is performed by attempting to separate the patient’s opposing thumb and fifth finger (D5) and the separation force is applied by the examiners hooked index fingers.

Initially the opposition strength of the thumb and the fifth finger of the non-affected hand is evaluated and immediately compared to the symptomatic upper extremity.

RWFF can be classified as either positive or negative. RWFF test is considered negative if no relative weakness is identified where no difference between fifth finger opposition strengths of the two hands is noted.

The RWFF test is considered positive if the examiner is able to separate thumb and fifth finger opposition with relative ease on the symptomatic upper extremity.

So go ahead and try the RWFF test on your next patient who reports of neck and upper extremity symptoms. A +ve RWFF may identify C8-T1 myotomal weakness; then test the ulnar nerve NDT to confirm! 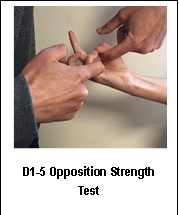