The Forward Functional Reach (FR) test has been shown to be useful for detecting balance impairment (Davis et al. 1999) with good to excellent inter and intra-rater reliability for patients with hemiparesis, Parkinson’s disease and healthy senior population (Lin et al. 2012).

The forward FR test has been shown to be sensitive in predicting falls if less than 25cm with a positive predictive value of 90% (Behrman et al. 2002).

A study on senior male veterans showed that those with a forward FR distance between 15cm – 25cm were two times more likely to have multiple falls and seniors with a forward FR test of less than 15cm were four times more likely to have multiple falls (Duncan et al. 1992). It must be stated that in all the above-mentioned studies, the forward FR test was measured by using a yardstick attached horizontally onto a wall, which is different than the method suggested here.

The patient stands with the dominant arm perpendicular to the body (elbows extended and shoulder flexed to 90�), and the other arm kept by the side of the body. The patient is instructed,
“Without moving your feet or lifting your heels up, reach straight forward with your hand as far as possible but try to keep your arm parallel to the floor”.

The test is repeated 3 times and the furthest distance displaced by the hand without losing balance is considered the outcome.

Clinical Scenario: A 75 year old patient with Parkinson’s presents with…

Since the FR test is less than 25cm, he may be at a higher risk of a fall. Based on this and other clinical tests, an assistive device may be recommended for walking. 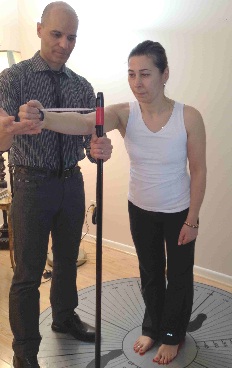